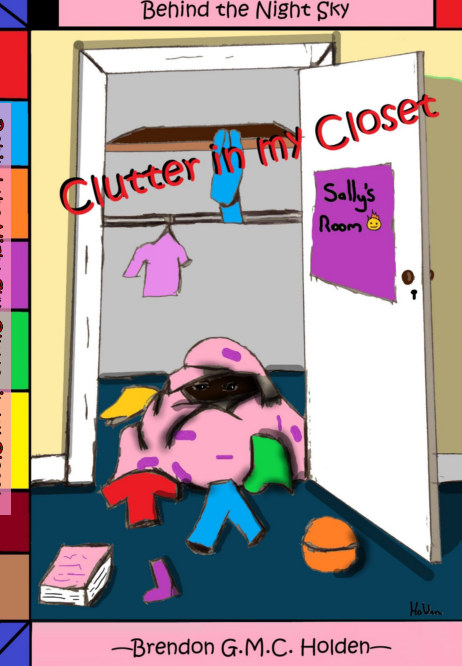 Behind the Night Sky: Clutter in my Closet

2nd book to the Behind the Night Sky Trilogy

Second book in the Trilogy to Behind the Night Sky, written by Brendon Holden, self-published through Blurb INC. Hardcover, Dust Jacket 6x9, 166 pages, 33,782 words, book includes three works of sheet music off the inspire me album: Inspire me, Lucifer Play: Best Friends and My Own Beat 2 Forest Houses.
Jill is an average young girl, or at least she thinks she is, never recalling the pain she buried deep inside, presenting herself to be flawless.
During a pandemic, she helps some of her newer friends escape the sickness happening on the outside world—and in doing so she uncover some new things about the new mansion her family just moved into.
Bizarre things begin to take place within the mansion, including traveling to other realms within the closets—of the mansion; some she goes on by herself and some her friends experience with her. On one of these journeys, she meets a critter named Clutter that begins to threaten her and her friends, saying, “I will burn down your house.”
She, her siblings, and friends must stop Clutter and save their fortune—to have a family and normal life once again.
Clutter in my Closet is fictitious and not to be taken in any other way. I was inspired to write this story based on small experiences that I personally experienced that I never could quite put into words—to share them with friends. An example of that would be Clutter creating gas in the closets—causing the children to behave in ways not common to their normal behaviors. I have had such an experience and wondered, what was the cause of such strangeness? Although it was not as apparent as it is in this story, it was enough to make me wonder how I would put that into words!

I am a Vermont Author, musician and artist. I have written such books as Smoking by the River and The Game, and produced such music as: Poison Berries, Behind the Night Sky and Back to Life! ...I hope to inspire those that I can, and share enough to I have made a positive difference in the world! I would love others to read my work, and grasp the in depth conversations written within the pages!