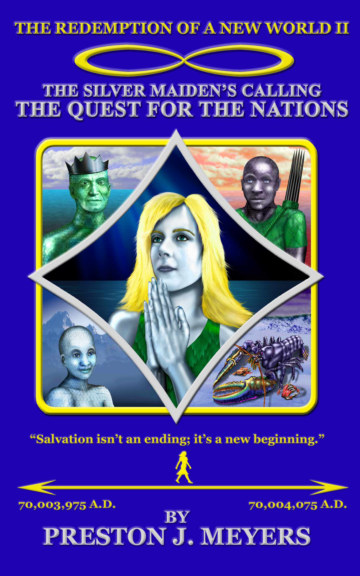 The Silver Maiden's Calling: The Quest for the Nations

“The hearts of those meant to be heroes are forged.”–Raeghus

After her father Marcus triumphs and redeems the faithful of the aquatic race from Hell, Mina sets out to share God’s Word with the three nations that have yet to hear it: the male-dominated culture of the Dyrin, the warrior culture of the Lyri, and the Kwawzan–a nomadic crustacean race descended from the creatures of the deep.
Mina clashes with King Argen of Dyre, baptizes King Cassmir of Lyre, and helps make peace between her people and the Kwawzan. She faces a bittersweet union to Daemin of Dyre, finds the courage to forgive and love him, and has two children of her own: Enoch and Deborah. After returning to her home country with her family, she and her husband are knighted by King Horom for their valor and pursuit of justice, and they are given authority over three cities in the Saluuni Kingdom.
But once again, troubles are brewing… The dark lord plots his vengeance against the last of the family Lotharius and sets a new plan into motion to destroy the God-fearing nations and bring his dark heir, Daemyien, into the world. Through the deceit of his false teachers, he begins to turn the faithful away from the Truth as he convinces some that they are saved through Marcus–not Jesus Christ. With the death of the honorable King Horom, his son, the foolish and hot-headed Meenom, claims the throne, and he is among the corrupted. However, when the deceived start sacrificing their children as burnt offerings to a statue of Marcus, he cries out from Idan to his daughter in a dream and pleads with her to put a stop to it. To obey her father and honor God, Mina will have to challenge a powerful enemy of the faith–her own king.
Join Mina on her quest to reach the lost as you witness her faith, courage, and love for others. Join her on her journey of discipleship, forgiveness, mercy, and perseverance, and continue seeking that which is eternal.